What is a provisional cast-on?

A provisional cast-on is a temporary cast-on that can be removed. This means that the cast on edge isn’t really an edge, but a live set of stitches that can be picked up and worked later.

What’s the purpose of a temporary cast-on?

This type of cast-on is used when you need to be able to pick up your stitches from the cast on and continue knitting in the opposite direction or grafting pieces together.

When to use a provisional cast-on

There are different ways to cast on temporary

There are many ways to do a provisional cast-on and I have to admit that I don’t know them all. But, I know some of them and I have listed them in this post so that you can try them out and see if you find one that you like!

Most of these methods use waste yarn, some of them call for a crochet hook and a few make use of both.

The easiest provisional cast-on I have found

This technique for making a provisional cast-on is the easiest I have stumbled upon yet.

You don’t need any waste yarn or a crochet hook and the steps are super easy to follow! In addition to that, there’s no need for picking up stitches! They will be sitting at your spare needle the whole time.

The cast-on is also invisible once you have knitted with all stitches. I guess I don’t have to tell you that this is my favorite provisional cast-on?

Those who are familiar with Judith’s magic cast-on, will recognize this as it’s, in fact, the same method!

But instead of knitting in the round, we will be knitting flat, leaving half of the stitches to rest on a spare needle. Judy’s magic cast-on is another of my favorites, this is my go-to for casting on sock toes!

Materials needed: Yarn, Knitting needles and a spare needle.
A circular needle is preferred but a double-pointed needle + some kind of stoppers to put at the ends will work for narrow projects.

1. Set up for adding stitches
Make a slip knot and place it on the needle you plan to knit with first. Pick up the needle and your spare needle. Hold them parallel with the needle with the slip knot in front.

2. How to hold the yarn
Hold the yarn as you were going to do a long-tail cast-on. With the tail over your thumb and the working yarn over your index finger.

3. Add the first loop
Start by picking yarn from the thumb with the spare needle (the one that doesn’t have a slip knot). Insert the needle under the yarn in front of your thumb, let the yarn slip of your thumb to form a wrap around your needle. The yarn should go from the slip stitch, under the needle, up behind and down between the two needles.

Repeat step 3 and 4
Continue to add stitches until you have enough.

Start knitting
Work the stitches on one of your needles in your preferred pattern. When you’re ready to knit in the other direction, you don’t have to do anything but add yarn and get to it. Your stitches are already on a needle!
If you have used a spare needle in the wrong size, just knit your stitches over to another needle.

I also made a short video just to show you the motions described. It’s really easy to do, but a bit hard to describe in text…

This method is very much like the usual long-tail cast-on. The difference is that the provisional version uses a strand of waste yarn along with the working yarn.

To make this cast-on you need a long piece of waste yarn, at least three times the length of the cast-on.

In this method, we use the waste yarn instead of the yarn tail that usually goes over your thumb.

With this method, the waste yarn is incorporated with the cast-on and there’s no way that the stitches could slip off.

This is what makes it a bit tricky when it comes to picking up the stitches again. You will have to undo the waste yarn and pick up the stitches one by one which can be a bit time-consuming.

For this, you need a piece of waste yarn that’s a bit longer than double the length of the cast-on your planing to do.

Or, you can use a spare circular needle or a cable from an interchangeable needle instead. This way you won’t need to pick up the stitches from the cast-on, they will already be sitting on your cable.

I don’t mind having a cable hanging in my project, as a matter of fact, I often have more than one dangling from my knitting to hold arm-stitches for example. But if you don’t like it, or don’t have enough cables/needles to make it work, just use the waste yarn!

This method is easy and crazy fast to do. But one thing I don’t like about it is that I get uneven tension in my stitches on the first row of my resting stitches.

I think it is because every other stitch gets more yarn when they are cast on. Or, it’s just me doing something wrong.
In which case, I don’t use this as much since I think the cast-on gets a bit uneven and therefore visible.

The stitches won’t unravel if they slide off the waste yarn/cable, but it will be tricky to pick them up later. Therefore it’s a good idea to tie the ends of the waste yarn together (so that they form a loop) to prevent stitches from sliding off.

If you don’t have enough yarn to do this, you can try making bows or adding hair clips at the ends of the scrap yarn.

The loops are your cast-on stitches that you’re going to knit in on your first row.

The size of the crochet hook won’t have any effect on the size of the cast-on stitches, the tension of your cast-on, that is determined by your needle.

How to start knitting flat

So, when you have your cast-on set up on your needle, it’s time to work your first row, using the working yarn.

It’s best to choose knit stitches or purl stitches for the first row because if you mix them it will be harder to unravel the crochet chain when you are ready to pick up the stitches.

The second row can be worked in any way you prefer.

Crochet provisional cast-on in the round

Reading tip:
––> This post includes a video that shows how to join knitting in the round
––> Learn more about what a crochet hook can do for your knitting: Why a crochet hook is a Knitters’s best friend!

Using provisional cast-on when knitting in the round

How to pick up stitches from a provisional cast-on 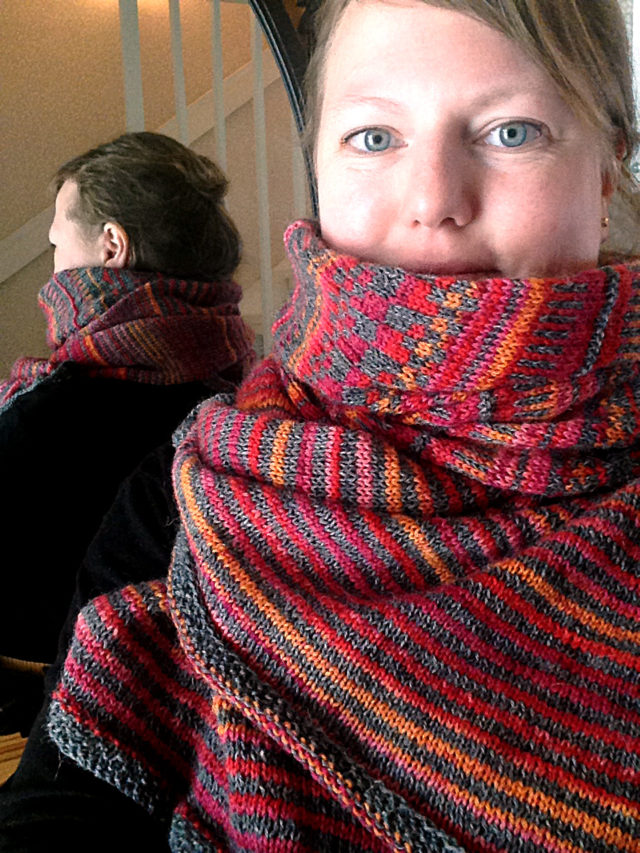 I’m an eager knitter and crafter 🙂

I’m also a mum of two (lucky me!), I live in Sweden, and I love baking and eating cookies!

Here on Don’t Be Such A Square I share my best hacks and resources with my fellow Crafters!